Bobby Forrester was one of the greats of the Hammond Organ in Jazz and Rhythm and Blues. He worked for years with countless legends of Black music, from Lena Horne to Ruth Brown and everyone in between. Primarily known as the keyboardist and musical director for legendary R&B singer Ruth Brown for over 26 years, Bobby Forrester’s funky Hammond B3 organ sound has supported a variety of well known blues and jazz artists, including Irene Reid, Gloria Lynne, Stanley Turrentine, Ray Alexander, Frank Wess, and Lena Horne. Presented here is Forrester’s rare, often overlooked 1971 solo album, which should prove a boon to both lovers of the soul jazz idiom, and B3 fans the world over. Bobby Forrester (Hammond organ); Elijah Williams Jr. (guitar); Johnny Kirkwood (drums). All selections newly remastered. 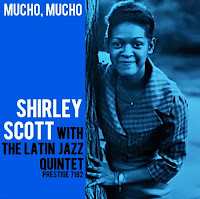 Shirley Scott - The Queen of the Organ (Jazz)